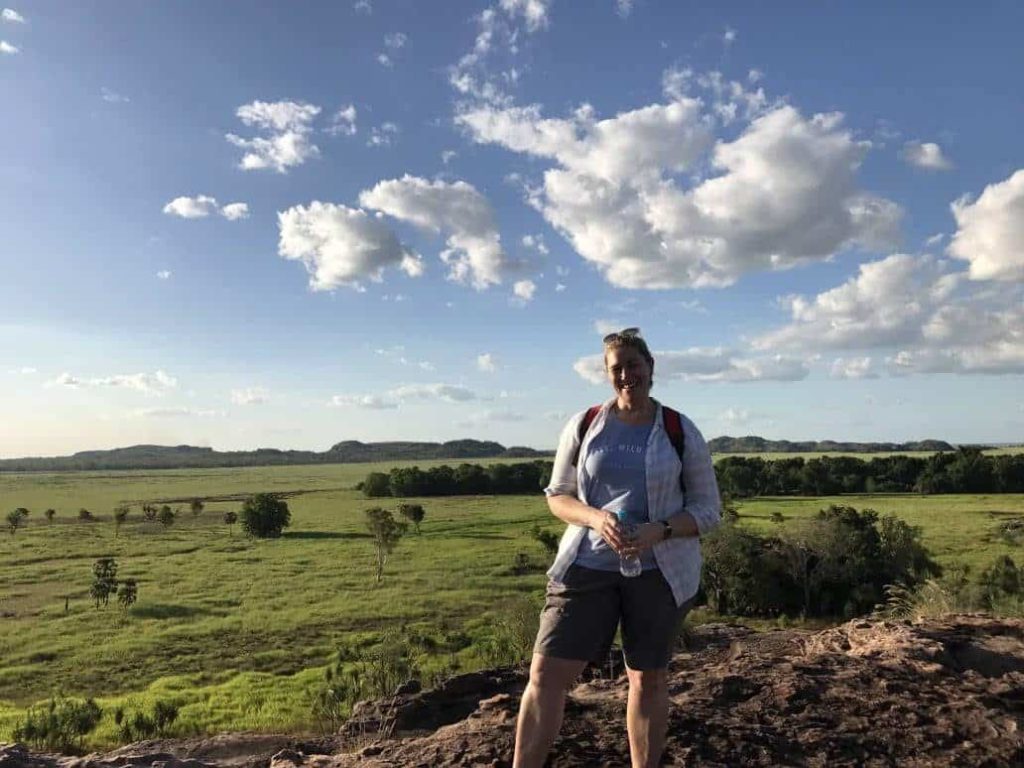 We get comfortable in life. When things are going well; we have a good job and a nice life, it is easy to fall into a rut. Sometimes a leap into the unknown can be a great thing, emotionally and spiritually. Geraldine Capp (1985) has recently made that leap.

Two years ago, Geraldine was a Senior Media Advisor with a Minister in the Barnett government. However, with the defeat of the Liberal government in the 2017 election, that job came to an end. What next? Geraldine surprised even herself by moving to the Northern Territory. However, it was for a great job that would allow her to use her skills to progress the cause of people who are living with abject poverty and severe disadvantage.

Geraldine is the Director of Corporate Communications for the NT Department of the Attorney-General and Justice, based in Darwin. Her job is to communicate to Australians what the NT Government is trying to achieve in justice and correctional services.

Aboriginal people make up a third of the population of the Northern Territory, but 85% of those in the prison system. Most of the time, 100% of children in detention in the Territory are Aboriginal . Geraldine says this reflects the need for reforms throughout the whole community to help prevent Aboriginal people going to jail and returning to jail. She is pleased to be working with experts in the NT justice system who have plans for positive reforms.

Geraldine’s role is to make those reforms into stories that resonate with people on a personal level. She takes the complex ideas and presents them in a way that matters to Australians.

In reflecting on the disadvantages Aboriginal people experience, Geraldine says “Most Australians never experience this aspect of Australia but in Darwin and in the remote communities, I see it every day. For many Australians, there is no equality of opportunity. Poverty, alcohol, drugs, sexual assault and violence are devastating Aboriginal lives.”

What then is the upside of Geraldine’s work? She says, “Working with Aboriginal people who have high expectations of themselves and all of those around them. In Australia we have a narrative of low expectation around Aboriginal people. I work with highly-educated, highly-skilled and passionate professionals. They are inspiring.”

Previous to her current role, Geraldine has worked in government and the private sector. She was a journalist at The West Australian for 12 years before moving into strategic communications. This shift means she uses public awareness campaigns, community engagement, social media strategies, digital tools and publications to tell engaging stories in new ways. Her role requires enormous creativity, particularly when working with a limited budget and the highly multicultural audience in the Northern Territory. “For many people here, English is their second, third or fourth language. What works in the rest of Australia doesn’t necessarily work here.”

In taking the job in Darwin, Geraldine has experienced enrichment in her faith journey. She has found working with poverty and disadvantage that is visible in the streets of Darwin every day highly motivating. She wants to make a difference. She encourages Catholic women who are feeling too comfortable and ‘dry’ in their faith to step out of that comfort. “Look for the places where you can make a difference in Australia. It is challenging but so worthwhile”.

Geraldine’s sister, Mary-Kate Walsh (1984) has also worked with many disadvantaged Australians as a nurse. Mary-Kate has been running a remote health clinic for the WA Department of Health in Yalgoo for the last four years. Mary-Kate has also worked in other remote health services in many communities, including Jigalong, east of Newman in the Pilbara, and Wangkatjungka community, 130 km south-east of Fitzroy Crossing in the Kimberley. Mary-Kate’s third daughter Molly is currently a boarder in Year 11 at Santa Maria.