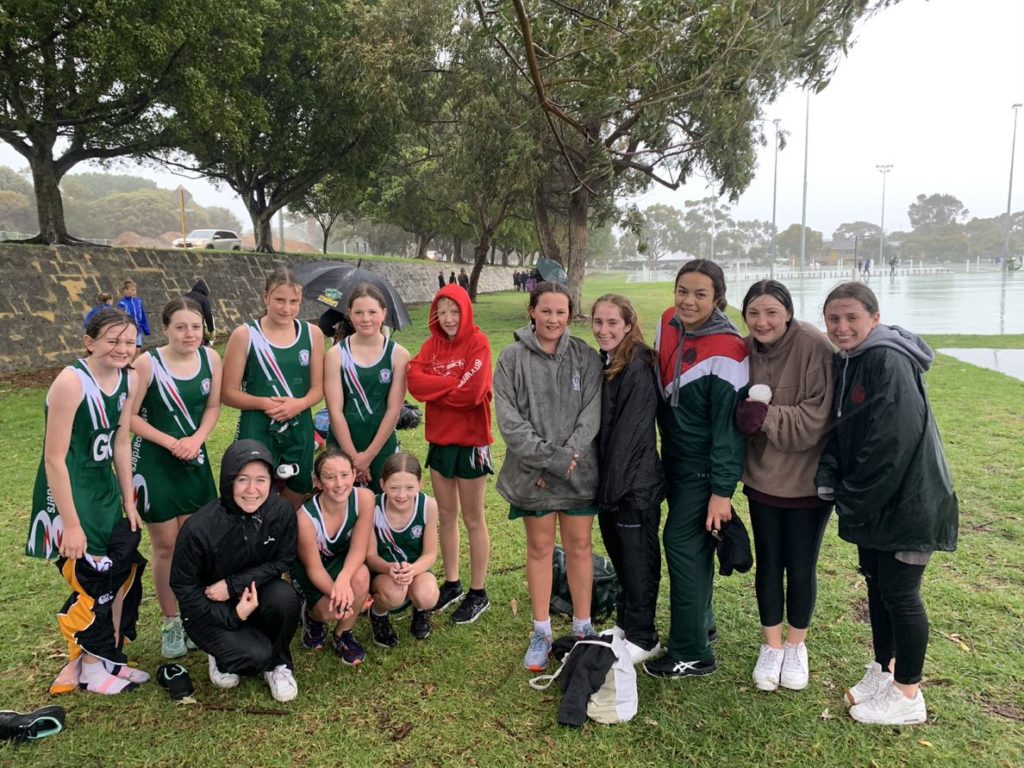 On Saturday,  the Years 7 and 8 boarders went bowling in Cannington with Aquinas. It was a lot of fun and the night went really quick. There was an arcade area where we played a few games. Some people grabbed snacks from the snack bar such as chips, chocolate, and frozen drinks. Some people got really high scores in bowling and others did as best as they could. Overall it was a great night, and everyone had lots of fun. Thank you to Boarding for organising the night out. Sarah Gugiatti, Year 7

On Sunday afternoon, Water Town outlet saw a bus full of Santa Maria boarders hit the shops. Aquinas College also attended at the same time, providing a great opportunity to mix with friends and family that board at Aquinas. Shopping is always a fun recreation event and the afternoon at Water Town was just that. The boarders have now requested a trip to the DFO near the airport, so look out for this on the rec calendar later in Term 3.

I coach the JC6 team along with Lily Haeusler and it’s safe to say I quite enjoy it! Despite having to wake up at 7.00 am every Saturday morning it is all worth it. The girls are a cheery and fun-filled group that always make training and games unpredictable and exciting. The girls are all very motivated and hardworking which is reflected in their gameplay. They have fortunately won all of their games except one!

They turn up to every game and training with a smile on their faces and continue to give it all they have and play to the best of their ability. Both Lily and I enjoy coaching the girls and they all bring something unique to our team, they are a pleasure to coach and we couldn’t have asked for a better bunch of girls.
Zoe Pedrin Year 12

It is a wonderful sight seeing younger and older girls helping each other out on game day to help the day run smooth. By helping girls get to the first aid for a rolled ankle or injury or filling in for a team who is short players at late notice, or even just coming to watch to support the girls playing. We are truly enjoying our Saturdays at netball watching teams grow and it has led to close games; we had a few over the weekend.

17U4 had a great two games on the weekend leaving spectators on edge the whole game losing by only two points on Saturday coming back from 15 down. To then play again Sunday where it was goal for goal and managed to break a few passes and win by eight points. The 19U1 game was also a very close and intense game this weekend with the girls losing by two points but coming back from being down by ten points at half time.

The 17U6 team have played some close games throughout the season. They are currently sitting fourth on the ladder. Our JA3 and JA4 girls, unfortunately, are yet to win a game, but the score truly doesn’t reflect the fight they put up throughout each game. It has been so wonderful for us to watch them develop their game play each round. Round one saw our JB4 team draw with Cockburn, and they have been scoring very closely throughout the season, winning one other game so far! JB5 unfortunately are also yet to win a game, however, again, we are loving watching them grow as a team, getting fitter and faster each week.

Our JC6 team has been smashing it this season, winning four of their five games so far. It really has been a pleasure to watch these girls get out on the court at 8.00 am every week to play as a team. Finally, our JC8 girls have evidently been bonding and growing extremely well as a team, as they have taken out two wins in the most recent games.

We are so excited to watch the girls continue to grow and develop their skills as the season continues, and hope to continue seeing family and friends at games to cheer on our teams!
Kirsten and Amelia, Boarding Netball Coordinators

This is my first year in Boarding and playing for Reds Volleyball.  It has actually been lots of fun. I have been playing volleyball with my friends and I’ve been able to make new friends from other schools. It’s really good because even though you are having fun you still are playing on a competitive level and are being challenged.

My team lost our first game but to be fair, that was the first time we had ever played or trained as a team. This week we won, we worked really well together. Having the training before was really good because we were able to focus on each other’s strengths.
Sarah Currell Year 10

After the delayed start to the season, we started playing at the end of last term. The Years 11/12 A Promo Team has six boarders which include four Year 12 students playing our last year of juniors, which has come around very quickly.

We are training hard every Tuesday and Thursday, ready for the games on Friday nights. So far, we have had wins, losses and draws; all good games and close competition. We are currently fourth on the ladder, which we can hopefully hold and move into finals at the end of term.

Our new turf facilities have been a great addition to the season creating a welcoming and supporting club environment, which is very beneficial for us boarders especially in our last year.
Tara Ralph, Year 12