Each week, our teachers are lucky to read creative, high quality writing from our girls. This week we thought we’d share with you a piece from Year 12 student, Ava Gamblin. It is a credit to her hard work and a part of our celebration of Multicultural Week. Great job Ava!

The banging of metal on metal, behind the whirring sound of steam lightly kissing the top of milk in a jug… there’s that smell in the air as cafes dot every corner. This is what fresh air and mornings smell like now for us: coffee is enticingly brewed inside and polystyrene cups are lined up ready to fill. It’s only 7 am, yet the queues here are big and the steam is puffing faster than a locomotive.   Inside people discuss their weekends over this warm delicious brew. But does anyone ever talk about Luigi “Gino” di Santo,  the importer of the first industrial coffee machine to Australia, who in a desire to drink something other than a brown lifeless powder diluted with water creating a 1:9 ratio of flavour to boredom, made a decision to bring something from home into the ‘new home’ he was creating. That machine stayed in customs for months because no one knew what it was. Not a weapon of mass destruction, but who would guess it would become such a weapon of mass revolution?

Somewhere between then and now, an espresso and biscotti outweighs tea and a lamington, as the taste of choice. There was no way of predicting that this yearning for a taste of home by immigrants in the 1950s,  could eventually transform the heart of Fremantle into its own version of a Roman piazza — “The Cappuccino Strip.”  Italians and Greeks knew, but now we all must have our coffee to function, whether because we are fostering our newly created caffeine additions, or because we need a subject for our soon to be heavily edited Instagram photo, aptly hash-tagged #yum. Where in Italy they stand up to drink their espresso as a ‘quick fuel up’ and go, keeping cappuccinos purely for the afternoon when you have time to unwind and relax after lunch, we still can’t quite get used to the speed of consumption, instead take the ‘act’ and ‘flavour’, putting our own ‘hipster’ twist on it so it’s no longer a culture kidnapping. 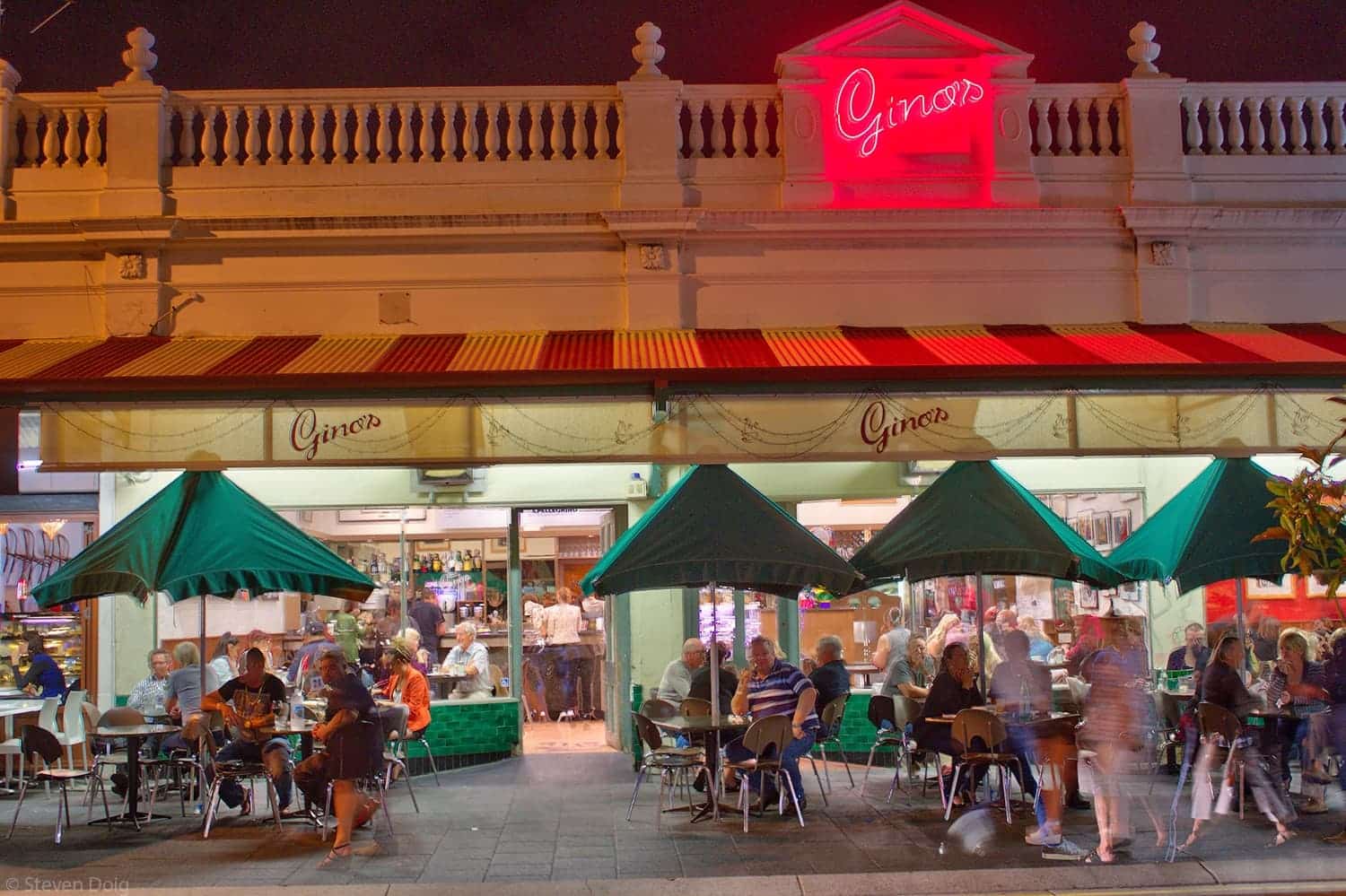 Don’t get me wrong, I am all for cultural integration. I have seen it first hand, my mum trying to comprehend how HP sauce on sliced white bread is a meal. My dad learning to twirl spaghetti on a fork without the backup of a spoon or dare I say it, a knife to make the lengths shorter and more manageable. I have just heard the family stories too many times — the teasing, the segregation and non-inclusion, and the fear?  Differences we are now adopting as our own. I am exhausted with the myriad of television celebrity chefs raving about the necessity for good olive oil, but when Greeks in the 50s living in our southern regions planted rows of olive tree seedlings, they were bombarded with a forest of scepticism and curiosity, (but not the good kind) because how could you ever think of drizzling anything but lard over your Sunday roast potatoes. Margaret Fulton would be wrapping you over the knuckles with her wooden spoon at the suggestion!

There was a time where squid ink linguine was an abomination but now it’s a gastronomic necessity. Peasants in coastal Italy were finding ways to create flavour on a budget, draining the black juices from these creatures of the sea. But it now seems that ‘rustic’ is the new fancy, with our socially elite choosing dishes like this to tantalise at a price, as opposed to the orange crumbed circles of sunshine (pineapple?? scallops? deep fried? ) their parents may have enjoyed as a taste from the sea. This lifestyle was anything but fashionable for the immigrants who brought these now well-loved tastes of culture to the Australian mainstream. But their impact was not merely reserved for the table. Locally, they laid down the foundations for the industry that Fremantle would become renowned for to the extent that it has become our AFL mascot. “Italian immigrants, together with their Greek counterparts, helped build the Fremantle fishing industry, suffering the usual forms of prejudice and unfair treatment by fishing industry auctioneers,” says Rita Mandile, a freelance writer and researcher and first generation Italian-Australian. “Fishing in Western Australia is now a billion-dollar industry,” and all because, for them, seeing seafood wrapped in yesterday’s newspaper was as much of a disappointment as it was a curiosity.

Integrating their culture wasn’t a quick or easy process — remember, Rome wasn’t built in a day. Australia didn’t experience a complete 360, where cultural customs that had previously been disregarded were now not only accepted but celebrated. The influx of immigrants that Australia adopted, were met with a less than content reception, so it is ironic that at some point, Vespas became a possible mode of transport for us and not just a ‘lawnmower on wheels’. Although I still can’t quite stomach pineapple on pizza, I can appreciate that the gradual meshing together of a lifestyle far from our own with some things distinctly Australian, has contributed to a wonderful smorgasbord of things we now have on offer in our local menu. We are all enjoying the choice, and choice is good. I hope we continue to choose to accept these things we may not initially understand or enjoy, because we have seen it makes for a healthy, balanced society.

I am not trying to dampen the joys we now experience day to day, or harp on about prior injustices, but I do think a moment of reflection between bites of bruschetta wouldn’t hurt every now and then — to remember there may now be pleasure, but there was also once pain. Difference is never the easiest to swallow, and that’s why small bites over the decades have allowed us to digest many a lifestyle and culture. And for those who in the beginning faced the unkind acidity or regurgitation, I hope they can smile with pleasure as their everyday food, a means of their survival, now translates to meals fit for television royalty! We need to raise our glasses of red wine, because we don’t have to have a special occasion to recognise how those immigrants helped to shape the lifestyle we adopt today. Just offering some food for thought… before you hop on your Vespa to the local cafe.