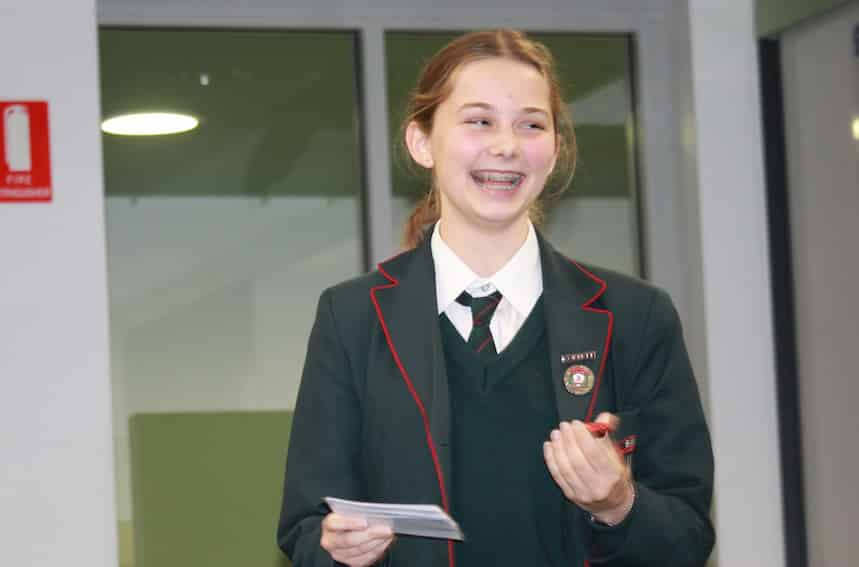 The annual Public Speaking Competition is always a hotly contended contest. Students from Years 5 – 12 competed over two nights. Students delivered prepared speeches, with the finalists delivering impromptu speeches at the end of the night.

Middle Years topics included ‘If I were an animal I’d be…,’ The harder I work…,’ ‘A good question…’ while the Senior Years chose from topics like ‘Technology is a drug and we are all addicted’, ‘With friends like these, who needs enemies.’ and ‘How to be economical with the truth.’

Workshops were conducted by Cultural Captain, Eva Quatrini and the Cultural Committee, in the lead up to the event to help students prepare.

Thank you to the many old girls who participated as adjudicators:

Below, two of our winners, Simone Shadley-Jones, Year 12 and Emily Berson, Year 8, reflect on their experiences.

I prepared for the public speaking competition by writing my speech and practising it a few times. Practising allowed me to get comfortable with it and learn how to phrase my points in order to have the greatest appeal to the audience. I always try to include different tones and change of pace throughout my speech to give it variation and keep the audience engaged.

For the second round, I was a bit nervous because I hadn’t prepared for it. I originally picked a different prompt, but then switched a couple of minutes into the writing time because it was going nowhere, and it was a good thing I did! My improv speech topic was ‘The worst driving lesson ever’. I personally haven’t had a terrible driving lesson with my instructor, but my friend told me a story once about how annoying her instructor was, and once I went into second gear instead of fourth on the freeway. So for my speech, I created a driving instructor and combined the stories to make it my own. It’s important for girls to not be overwhelmed by the impromptu speeches if they can’t relate to the topics because this section is just like writing a story or playing a character. You just fake it till you make it. I had great fun performing my speech. Public speaking is a really important life skill and being able to participate and practise in a friendly, supportive environment is an awesome experience and one I hope many girls at Santa Maria will get to enjoy.  Simone Shandley-Jones (Year 12)

I competed in the Middle Years public speaking, with 27 other girls in total, three of us represented O’Reilly House in two rounds. To prepare before the night I drank some water, got a good night’s sleep, and practised a few times.  I had a light dinner beforehand, but not too much as nerves really get to my stomach. I didn’t go through my speech too many times, so as not to get tongue twisted whilst performing my prepared speech. On the night I felt very nervous to the point of thinking I might be sick but as soon as it was my turn to give my speech “What came first – The Chicken or the Egg?” I felt absolutely fine and afterwards was even excited. When I found out I had won I was over the moon. I felt sorry for the other girls, so I made sure to congratulate them on their impromptu speeches and the incredible confidence they had to be able to participate in this competition.  All of the girls who took part were incredible, they were confident and well prepared, and, in my eyes, we are all winners. Emily Berson (Year 8)