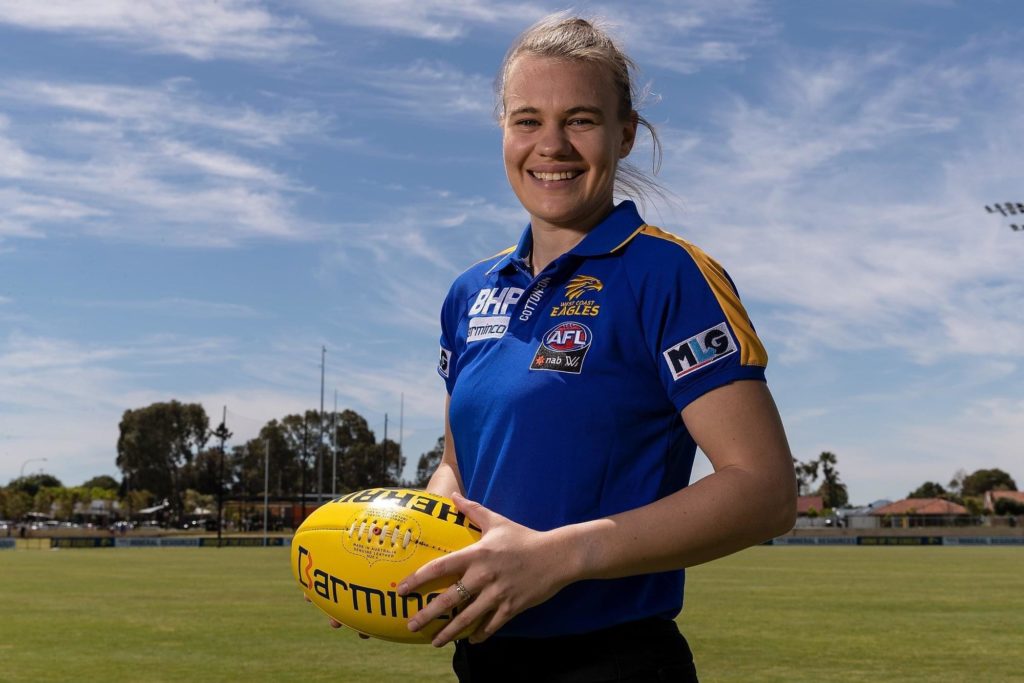 What has been your journey since leaving Santa Maria College?

I was a boarder at Santa Maria College from Katanning. So, once I finished school I had to move from Katanning to Perth to begin studying. I started studying a Bachelor of Chiropractic at Murdoch University.

Since leaving school, I have also worked as a disability support worker for a company in O’Connor called Proudly Productive and I’ve been a swimming teacher at Leighton Beach each summer for the past few years.

I started playing football at East Fremantle Sharks in 2017, where I played a year of reserves and unfortunately lost the grand final. I finally managed to move up to the league the next year, winning consecutive grand finals in 2018 and 2019. I also have played touch rugby each summer for the past three years where we won the state championship at the start of this year.

When did you first become interested in women’s football?

I had always been interested in playing women’s footy. One of my friends from Santa Maria College tried to convince me to head down to East Fremantle Football Club. After a few years and once finishing school in 2017, I decided it was a good time to get into it and have a crack.

How do your football commitments fit in with the rest of your life?

I am lucky enough that my football training is late in the afternoon and all games are on Sunday so it works quite well around my university hours. My workplace and boss have been amazingly supportive of my university and football training hours. Even now with being drafted and having more football commitments, such as inductions and meetings, they have allowed me to move my hours around so football can come first and my studies do not suffer.

What was it like to be put into the draft combine and the experience of being chosen to play for the West Coast Eagles?

It was really unexpected but a huge honour to get invited to the draft combine. I was really nervous competing in the series of tests over two days which included a vertical jump, 20 m sprint, and a 2 km time trial. From there to be considered for the WA AFLW clubs was really exciting. They kept it all under wraps whether or not I would be selected so when my name was called out it was a huge relief but also filled me with excitement and nerves. It’s a lifelong dream to be able to compete at the highest level so hopefully, now I can knuckle down and work hard to make my debut this season.

What has been your major highlight along the way?

Winning two grand finals in the WAFLW in two years has been pretty special. To get that reward for everyone’s hard work and effort was something I will never forget. But nothing beats having my name called out in the draft to play for the West Coast Eagles next year and getting the phone call from the Eagles staff welcoming me to the club. I don’t think I said much while on the phone. I was still in shock and quite emotional, but to receive that was like the icing on the cake that I really had been drafted