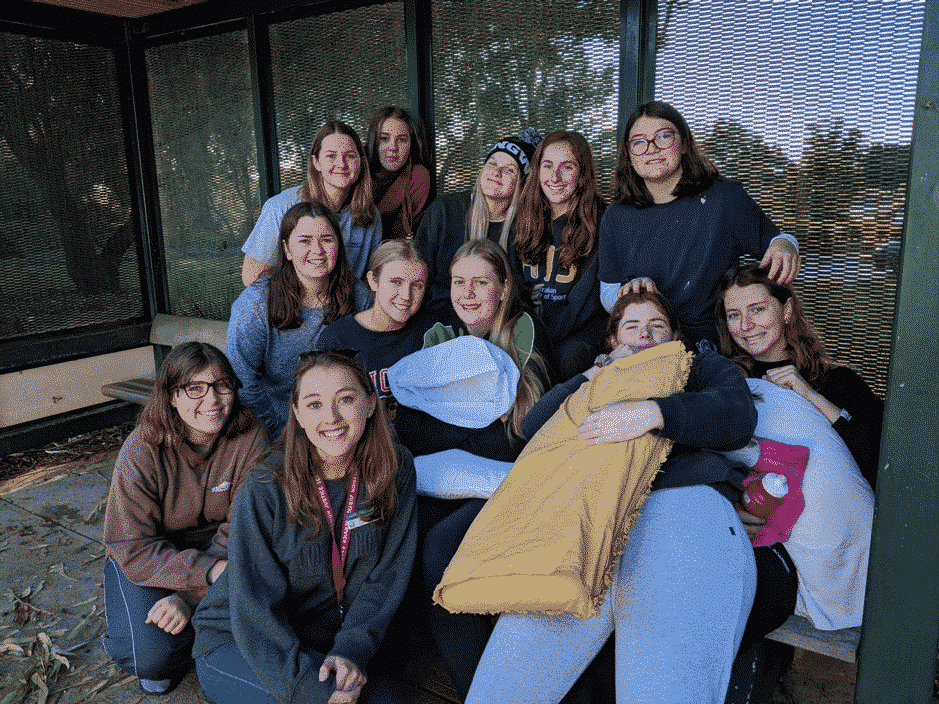 Understanding and developing leadership is an ongoing process. We include many opportunities for the girls to grow in their capabilities. One such opportunity is the Leadership Camp. This event was held recently at Forrest Edge in Waroona and also attended by the Year 11 boys from Aquinas College. Team building, communication, strengths and personal styles are the focus of workshops held over two days.

I asked some of the Year 11 girls to write about the experience.

Last weekend I had the privilege of attending leadership camp with the boarders of Aquinas College. The camp went from Saturday morning until Sunday afternoon however I went late so I could play netball. As soon as the bus that brought the netball girls pulled up at the campsite, at Forest Edge Camp in Wanneroo, my bad mood from an unfortunate loss instantly changed. The boarders from both Aquinas and Santa were mingling, with people having a great time kicking a footy or talking, and it wasn’t long before I joined in. This was just the beginning of an exciting two days.

The highlight of the camp for me was abseiling. It required a lot of collaboration, as we all had to band together to use a pulley system to hoist each person to the top of the wall, starting at 9-metres high. When it was my turn a few nerves fluttered in, but with the support of my group and the staff, I was soon bounding down the wall.  It was an amazing experience, and I was excited to go again – this time going down from 20 metres up! This activity, as well as all the others we did, was invaluable in teaching us about the importance of teamwork, and how even as leaders, we need to rely on those around us for support and guidance. It was an incredibly worthwhile camp and I am so grateful I was given the opportunity to be able to learn so much about leadership while enjoying myself with old and new friends. Chloe Henville 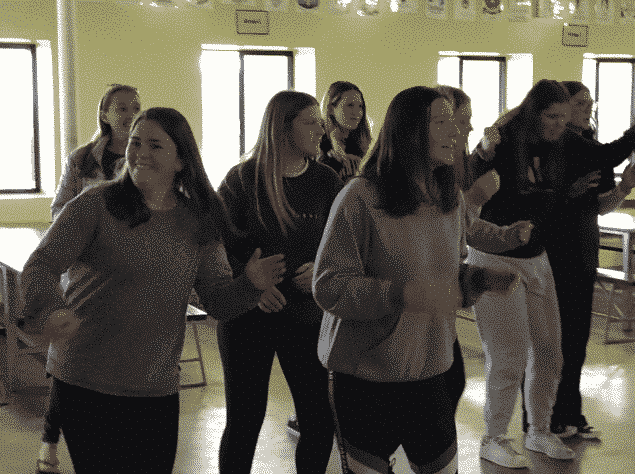 The leadership camp was a great experience and an important opportunity to get out of your comfort zone. We joined the Aquinas Year 11 boarders in Waroona, which is about an hour and a half south from Perth. Half of the girls had to play netball that afternoon so weren’t able to make it to Waroona to join the rest of the group until 6.00 pm that evening, which was lucky because we were able to watch the amazing sunset from our spot on top of the hill. That night we spent our time catching up with each other, playing some team building games and then spent the rest of the night by the fire with a warm milo. Before bed, the girls played an informal game in a circle, which brought us closer together as a group.

We were woken at 6.00 am the next morning and packed up our gear. After a cooked breakfast, our group had to do the ‘leap of faith’. This activity, which includes stepping off an 8-metre pole that wobbles back and forth as you climb it, was incredibly scary to watch. Some of the boys even did it blindfolded. We then sat down in groups of girls with Ursula and Miss Cain, the housemothers and had an intense discussion about leadership and aspects of boarding we could improve on next year, which was extremely insightful. After saying goodbye to the boys, we went to the restaurant Grill’d for burgers, a delicious way to end a great weekend.  Jasmine Norrish

The leadership camp offered us a chance to discover our own leadership style as well as think about what we want to bring to our boarding communities as the upcoming leaders in 2020. This camp helped to prepare us for the responsibility of being a role model to the younger students and help prepare for our role of being the senior students at the College. On the camp we participated in many activities, abseiling, crate climbing, the ‘Pamper Pole’, many other team building activities as well as discussion about boarding and as leaders, what we would like to bring to boarding.

The camp allowed me to learn about what it takes to be a leader and to understand the time and effort that needs to go into being a leader. It also gave us the chance as a boarding cohort to discuss what our year group wants to contribute to the boarding community. I enjoyed participating in all the activities as it allowed me to step out of my comfort zone and take part in many different activities we don’t get to experience all the time. It was nice to be out of the boarding house doing something different in the company of people we don’t get to do stuff like this with, and as a year group we grew closer together. Zoe PedrinOver the weekend, my Year 11 boarding sisters and I attended Leadership Camp. Over the twenty-four hours we were at the camp, we took part in activities that tested our bravery, leadership and ability to work as a team. Most of the activities included supporting each other as our teammates challenged themselves. We went abseiling from both ten and twenty-metre walls, built and climbed on stacked (and very unstable) milk crates, so someone could touch a short rope hanging from the roof, and climbed the ‘Pamper Pole (which was just a VERY wobbly pole with ladder rungs) to stand on an A3 paper sized platform at the top, to jump off! I’m not a big fan of heights, so you can imagine how I felt about doing these activities, and then watching my teammates also climb up these crazily high structures. But over the weekend I learnt to trust that everyone was in good hands and would support each other, no matter who you are.

I felt really supported when I got stuck at the top of the pamper pole, frozen in fear. I had climbed up (hesitantly, may I add) to around eight metres up when I finally looked down and couldn’t move anymore in fear. The shakiness of the pole definitely wasn’t helping me feel any better about the distance between me and the ground. But as soon as I got stuck up there, my teammates started to encourage me to just come down and that I would be alright and that the rope holding me would keep me safe. Admittedly, I cried at the top of that pole, and I definitely haven’t conquered my fear of heights, but I did find comfort in the fact that there were eight people below me cheering me on and telling me that I was doing great and that I would be alright, even though I hadn’t known half of them before that weekend. That moment of coming down from that pole was definitely the highlight of the camp for me, as terrible as that sounds, but the relief I felt when I touched the ground and people congratulated me on letting go and getting down was so great. As traumatic as the ‘Pamper Pole’ was, I still had such a good time over the weekend, and I do feel that I made more connections and friendships within my group. Harriet Comerford-Smith 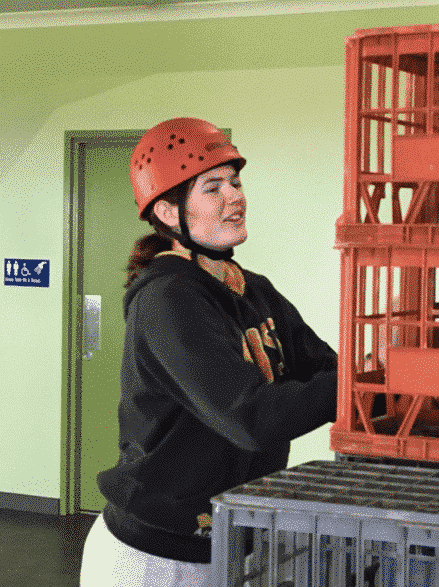 The leadership camp not only allowed us to develop many leadership skills but also gave us all a chance to get to know and develop greater friendships with the boys from Aquinas. Throughout our time in Waroona we completed many activities, some I personally thought I would never take part in…abseiling off very high platforms!  However due to the encouragement from everyone within my group I got up to the top and turns out it wasn’t even as bad as I had first thought.  While completing these activities many of us not only developed many new leadership skills but also came away with an understanding of how to implement them into our own lives.  Especially within our own boarding communities as the opportunity for us Year 11’s to step up and become role models for our younger peers is fast approaching.

We discussed as a cohort what we wanted to introduce into boarding, what we wanted to leave behind as our legacy.  We all developed an understanding of ways to work cooperatively in a group, making sure everyone was given the chance to speak and present their own ideas. Mackenzie Goss

The leadership camp we attended on the weekend was an experience I thoroughly enjoyed, it gave us the chance to interact with the Aquinas boys in way that we wouldn’t usually, through small ice-breaker games and outdoor recreation activities. I learnt that jumping off an eight-metre-tall pole trying to touch a buoy that is right in front of you is a lot harder than it looks because after two goes I still couldn’t do it.

The highlight of the camp for me personally was Saturday night when we did our team building games in our groups, everyone was able to get creative, involved and competitive. It was a positive team orientated atmosphere with smiles all-round. We played charades, a human like battleship game, which lead to a heated face-off between the groups Lions and Cats causing a tense 5-minutes, with the boys trying to contain their competitive sides in the battle for a mars bar. The outdoor activities allowed us to challenge ourselves, improve our leadership skills by encouraging one another and volunteering for different roles. The camp was an experience I valued, allowing to myself to be challenged, interact with different people and do something more diverse. Lily Haeusler