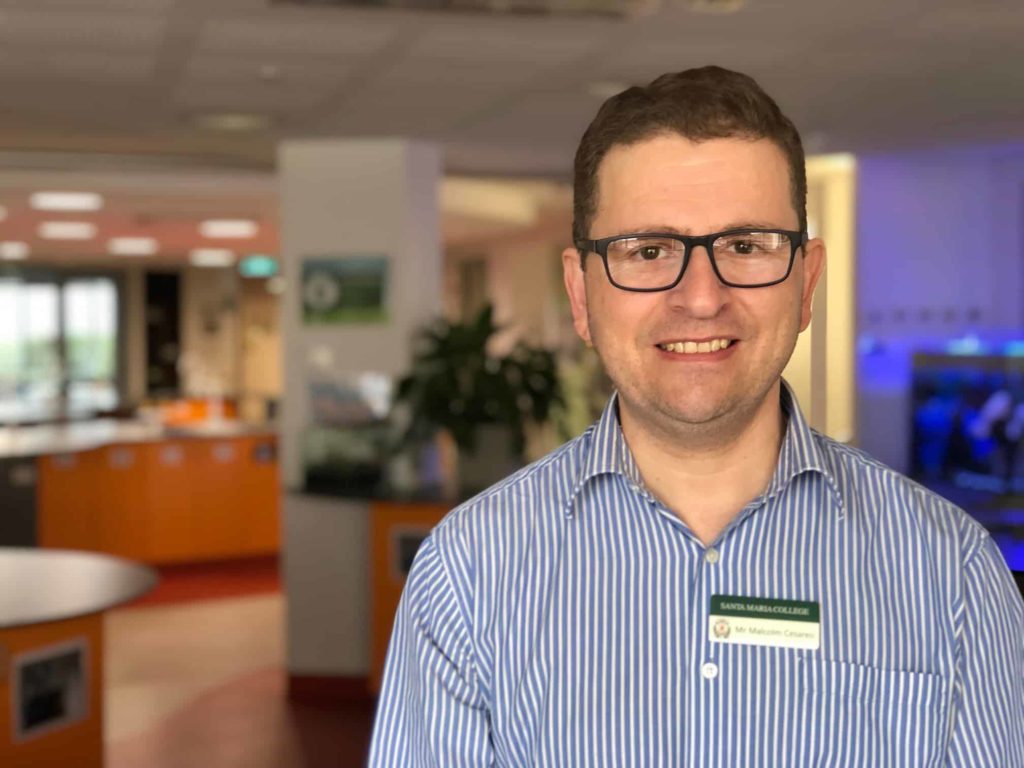 What do you teach at Santa Maria?

What did you do before you became a teacher?

I studied Industrial Chemistry at Murdoch and then worked as an industrial chemist for a couple of years in Japan and in Perth. After that, I studied at the seminary in Melbourne. While preparing to become a priest I did mission work on the streets in Melbourne, I worked in an old people’s home and held teaching roles in Victoria and Queensland. It was there that I discovered God was calling me to be a teacher, so I returned to Perth and completed a post-graduate Diploma of Education.

How do you reconcile your beliefs as a scientist and as a spiritual person?

The creation story occurred in the big bang and is still going on today. We can’t become fixated with rules and literal understandings. We need to be open to a world that we will never fully understand. Science has only touched the very top of knowledge.

True wisdom is to be open to what we don’t know and understand. That’s God. Our traditional, dualistic world doesn’t allow for open thinking and possibility. I love being able to show students a huge spectrum of possibilities in thinking.

Where should we be gathering wisdom from?

Our old people have so much collective wisdom and as a society, we don’t value that. A lot of young people are intolerant of the elderly rather than learning from them. Not all, but a lot.

We need to look at other cultures; our Indigenous People, eastern cultures. They’ve suffered a great deal and yet they have a sense of peace that we could learn from. Each of the ancient tribes has processes of initiations, particularly for boys. They recognise the value of suffering and learning from that suffering.

I play the violin, music is another way of experiencing the goodness, the truth, the beauty, that is God. When we play music there comes a sense of unity that bypasses the rational self. It is one of the thousands of threads feeding into the story of the presence of God amongst us intimately, in our very core.

I love the people, the place and the positivity. There is a positivity here that I haven’t experienced in other schools. We have a quiet confidence about our students; about what they are capable of now, and what they can do in the future. As a society, bad news surrounds us, it’s very negative. But when you have students whom you have hope in, you feel as though you are contributing.