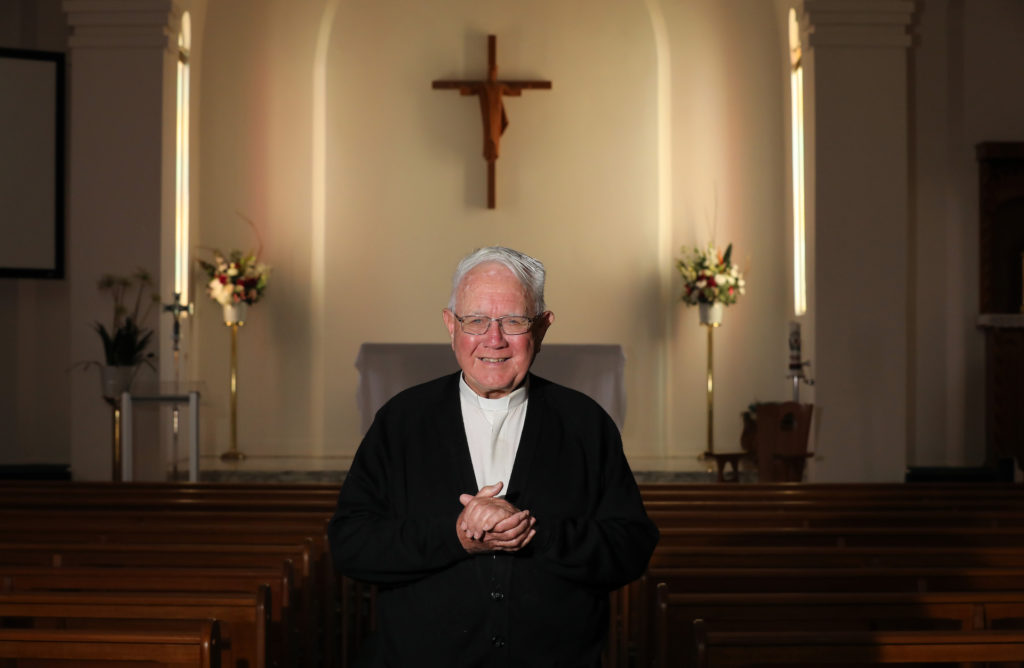 On Friday mornings before school, our College chapel is full of girls fresh from sleep but ready to start the day with our community Mass. Monsignor Michael Keating unpacks the Gospel messages through stories they can relate to, he makes them laugh and then sends the girls out with a blessing to carry them through the day. Most of those young girls are completely unaware of the wealth of learning and experiences of the Monsignor, which is fine with him. He sees his role as pastoral care, which means being relatable and approachable.

Monsignor Keating is a Perth boy through and through. He may speak fluent Latin and Italian and have lived abroad, but he has that Aussie sense of humour and a passion for the West Coast Eagles.

Born Michael Keating, he grew up in Wembly in the parish of Subiaco. He grins as he describes his “incredible parents and very good family life”. The young Michael attended St Joseph’s primary school with the “beautiful Brigidine nuns”. He then went on to high school at Aquinas College and then St Louis Jesuit School which later became John XXIII College.

At a very young age, Monsignor Keating felt his calling to be a priest. By 19 he was studying theology in Rome and at 22 he was a deacon. This was at a time when the Church was in the midst of making history. The Vatican II Council began in 1962 and the young Michael was charged with helping with logistics and with the needs of a group of bishops for the duration of the first session of the Council. The responsibilities allowed him to sit and watch as those men made the most dramatic changes in the Church’s history.

Monsignor Keating celebrates the changes that came about. He says, “The good old days weren’t as good as people like to think.” He thinks the changes made in Vatican II were appropriate. “The Mass went from Latin to the language of the people and the role of the clergy became more pastoral, meaning ‘of the people’.”

At 22, the Monsignor was ordained a priest at the Vatican. With the benefit of hindsight, he thinks he was probably too young and the more recent trend of delaying until a man’s late 20s is a good thing. He was identified as a good student and was asked to study for a Doctorate in Canon Law. As he was studying in Rome, all lessons were in Latin. He even had to defend his final thesis in Latin. His results were outstanding.

Over the years, Monsignor Keating has had an array of interesting roles. He was an Assistant Priest, a Parish Priest, the Vicar General of the Perth Archdiocese for 16 years, Governor and Trustee of the University of Notre Dame and Chairman of the Catholic Education Commission. Two years ago, he stood down from his role as Dean of St Mary’s Cathedral, but he is still Head Judge of WA in the Marriage Tribunal. It is an impressive resume and one he puts down to some luck and excellent support from others.

There were some wonderful highlights in his long career. He says, “We are a universal church and I’ve been lucky to travel a lot, especially on Pilgrimages. I‘ve spent time in Europe, the USA, Asia and various countries in Africa where the Church is thriving. They have huge crowds at Mass. In the western world our numbers are decreasing. Perhaps our privilege means we don’t feel we need God as much.”

Other great opportunities included two stints as a Cruise Ship Chaplain and the chance to attend four World Youth Days with young people from the Bateman Parish. He says, “I was perhaps afraid of young people when I first went to Bateman, so I decided to plunge in and challenge myself. I enjoyed it.” That experience paid off for Santa Maria College. Our girls enjoy their time with the Monsignor.

The current Pope Francis enjoys Monsignor Keating’s great admiration and respect. “He’s an incredible man, but under attack from the right-wing of the Church. When you meet him, he looks at you and engages with you. He listens.”

“He’s a reformer, a changer. I’m sure Pope Francis would like to improve women’s role in the Church.” Monsignor Keating says of women, “They are two-thirds of the parishes, and most parishes are essentially run by women. Why can’t their roles be extended?” When asked about female priests he said, “It is important we clarify the role of women.” 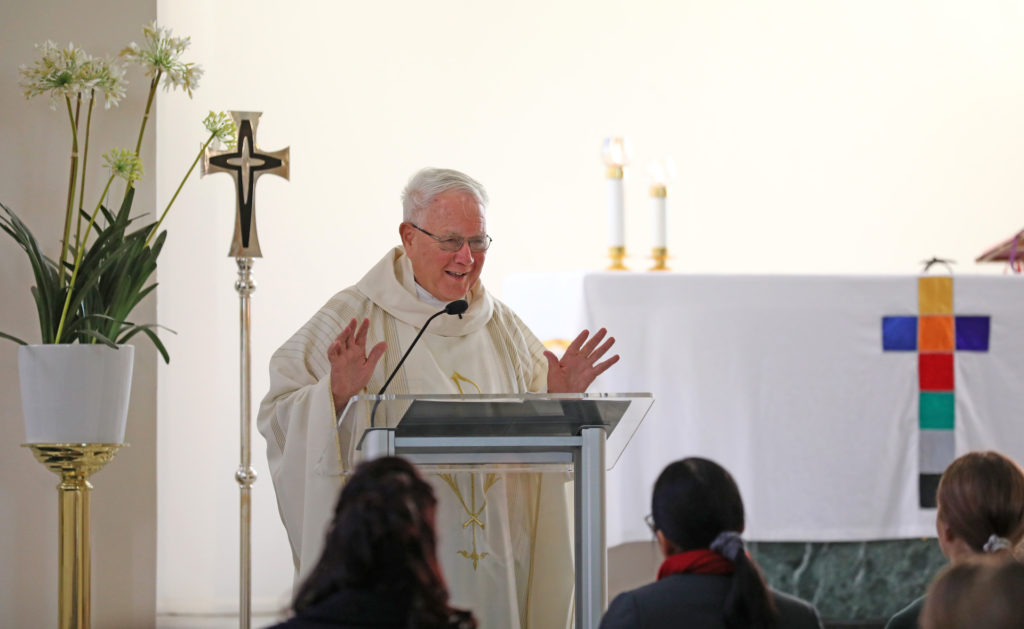 COVID-19 has proven to be a nightmare for some parishes. “With all the rules, the churches have been shut down for months. Some parishes have been very inventive online and in gathering people together safely. Parishes may never be the same again. However, we are finding that people are dropping into churches who have never been before. They just want to come and spend time in a quiet place.”

These days Monsignor Keating celebrates weekly Mass at Santa Maria and once a fortnight he celebrates Mass in Latin in Kelmscott. He is a supply priest for parishes when their priest is on leave or unwell, and of course, he still does some Canon Law work and some weddings, funerals and baptisms.

If you walk around the Perth city precinct in the mornings, you may see the Monsignor picking up rubbish or helping out the homeless. He does both daily. He had a Rector in Rome who used to say, “Most of you are not called to do great things in life, but do the little things well.” He believes the little things are the big things; looking out for one another, staying in touch with those who are isolated, pitching in when you can. And what should we do for ourselves? “Keep God in our lives, keep a good sense of humour and do the best you can.”