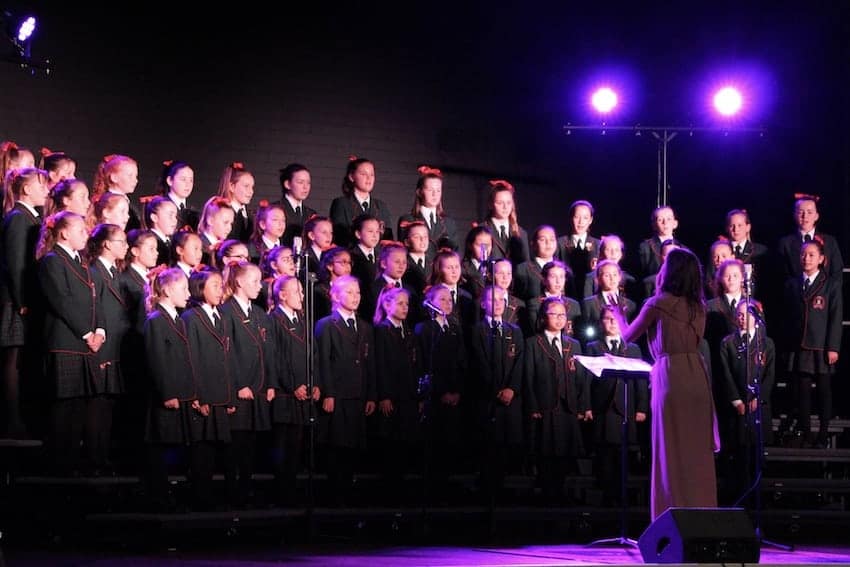 The audience included Principal, Ian Elder, Deputy Principal, Jennifer Oaten, Sisters of Mercy, members of the College Management Team, parents and friends. The Wandoo Hall was filled to capacity, having been transformed over the course of three days into a performance venue with full sound, staging and lighting.

The performance was divided into two main sections with the instrumental ensembles performing first, followed by the choral groups in the second half. All of the groups rehearsed throughout Term 3 in preparation for this event, with the traditional emphasis on contemporary pieces and songs ranging from a memorable performance of ‘Spider Man’ to the stirring orchestral arrangement of ‘Pirates of the Caribbean’ . A staff rhythm section accompanied each of the choral groups, with the full Massed Choir concluding the performance in fine style.

An important part of the Showcase performance is to recognise the contribution of the Year 12 students as they come to the end of their final year at the College. Twenty-seven Year 12 musicians were called individually and presented with a yellow rose and a special key ring in recognition of the years of effort they had given to the co-curricular music program. Mr Elder also addressed the audience, highlighting the contribution made by all of the students from Years 5-12 who had performed so beautifully on the night, and thanking the staff involved with the preparation of each group for this significant event.

I would like to take this opportunity to thank Evanna Brando, Rebecca McGregor, Helen Shanahan, Malcolm Cesareo, Leigh Miller, Mike Perkins, Andrew Pearson, Taylor Cutts, David Hadfield, Andrew Portwine and Katie Mowday for their many and varied contributions on the night, ensuring the concert was a great success.

I would like to extend a special thank you to Rebecca Waterhouse for her wonderful work with the ensembles and chorales and also for many hours of logistical organisation that ensured the smooth running on the night.

A concert is nothing without an audience and I would like to thank all of the parents, friends and invited guests for coming out in such large numbers to support the staff and students on the night. Your participation and support is vital to the ongoing success of the music program and is very much appreciated.

Finally, I would like to thank all of the Music students who have worked so hard throughout the term, rehearsing each week in preparation for the Showcase concert and for doing such a professional job on the night. Your talent and commitment to the Santa Maria College Music Department is highly valued and your success is thoroughly well deserved. Well done!

Below is a snapshot of the evening. To view all photos click here.