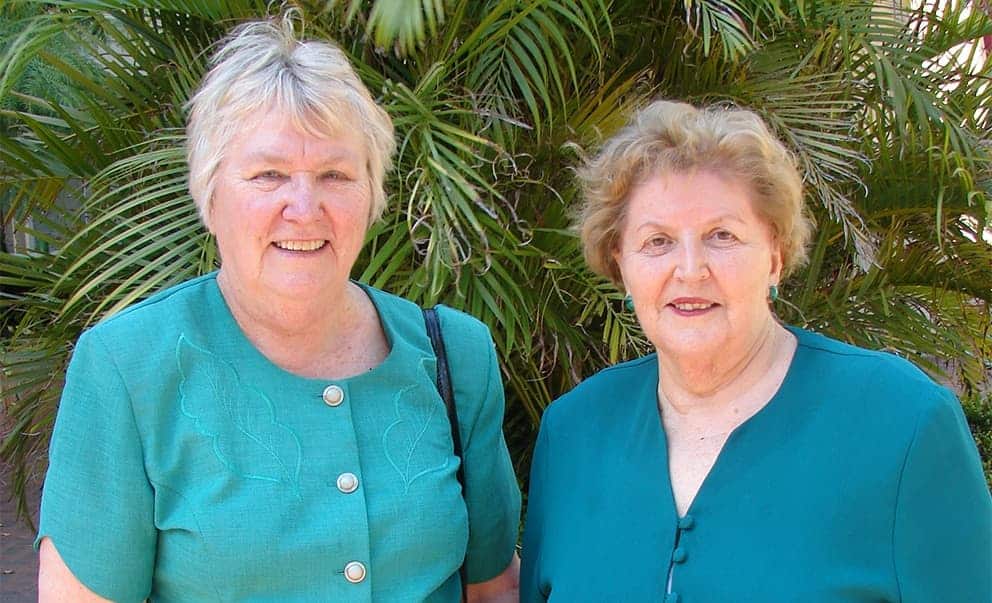 Some stories are worth telling more than once. This is one of them. First published in our De La Vida magazine in December 2007.

“It was already getting dark when the car stopped in front of a big cream coloured building overlooking the Swan River. As I got out, I could not help but notice the picturesque location of my new school, Santa Maria Ladies’ College in Attadale.” – Mietka Nowak.

Four thirteen-year-old girls stand in front of a large, cream coloured building surrounded by thick bush land. They barely speak a word of English between them. It is May 1950, almost ten years since they and their families were forced to flee their homeland Poland; casualties of Stalin’s plan to eradicate Polish people from Eastern Poland.

The girls are at a revolutionary stage of their lives. After years of exile in Siberia and living in refugee camps in Persia (Iran) and Tanganyika (Tanzania), it is time to begin a new journey; boarding at Santa Maria College.

Three months earlier, Mietka Gruszka (Nowak 1954), Halina Czekalowska (Szunejko 1954), Zofia Nowak (Muszynski 1954) and Hanna Maidment (Prewysz-Kwinto 1954) arrived in Fremantle aboard the General Langfitt. The girls and their families initially moved to a migrant camp in Cunderdin, however it was decided that they would be educated in Perth. Said Mietka: “We travelled by train to continue our education at Santa Maria; beginning our sink or swim adventure with Australian schooling.”

As would be expected, the ladies said their lack of English was the most difficult aspect of their new schooling. “At the age of thirteen years old it was very daunting and lonely,” said Halina. “But the nuns and boarders did make a great effort to communicate with us and make us feel welcome.”

“After a few weeks of just listening and watching , we tried our hand at some arithmetic and English grammar exercises,” said Mietka. “We also joined in with sports, singing and poetry recitations – learning the words parrot fashion without understanding what we were saying!”

Halina said her school reports at the time showed very low marks in English but “very good” for religion and behaviour. “Of course my behaviour was no problem,” she said smiling. “How can you get into trouble when you cannot communicate your evil intentions to your peers?” 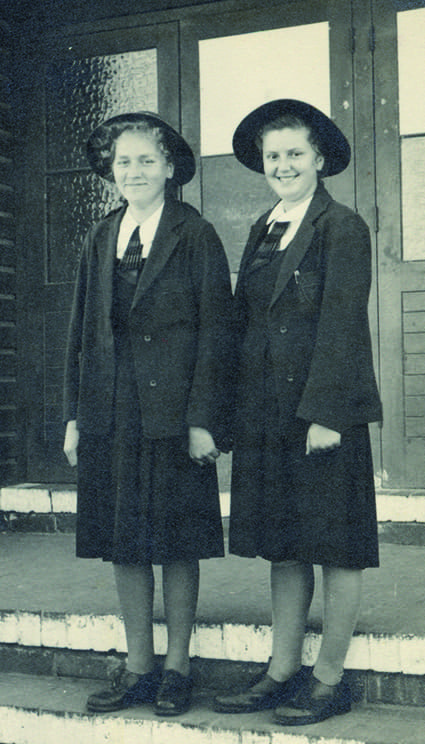 The ladies remember life being a very busy routine at boarding school. The following extract is from a recent essay Mietka wrote titled, My School Days in Australia.

Our days always started at 6.00 am with Mass in the school chapel. After breakfast there were chores to be done before school, which started at 9.00 am. After school there was afternoon tea consisting of bread and jam and we visited the school tuck shop to spend a few pennies on sweets. Between 4.00 pm and 6.00 pm was our ‘free time’. We went swimming in the pool located in the school grounds, played netball or skippy, went to choir practice, or just sat under the trees and talked…hiding from the watchful eyes of the Sisters, who were determined that we should mix with English speaking students to practice our English!

At 6.00 pm we all went to the Common Room to recite the Rosary. Dinner was at 6.30 pm and between 7.00 pm and 9.00 pm was time for homework. We sat silently in rows of desks, working diligently at our various assignments, while one of the Sisters kept a watchful eye on those who were most likely to misbehave.

At 9.00 pm we went upstairs for a quick shower and then to bed. At first we slept in a big dormitory with twenty other girls, but as senior students we each had a curtained cubicle in which there was a bed, a wardrobe and a dressing table with a mirror. Lights went out at 9.30 pm, but that did not necessarily mean that everyone dutifully went to sleep. We often read absorbing novels with the torch under the blanket, or snuck into other girls’ cubicles for a chat or a late night snack. To avoid been caught by the Sister on duty, we listened carefully for the jingle of the big wooden rosary beads which each nun carried, hanging from her waistline.“If the nuns ever knew we read love novels under our blankets after lights out, they never let on,” said Halina.

Sunday was definitely the girls’ favourite day of the week. After morning Mass, the boarders would sit down to a breakfast of sausages and thick gravy. They then were required to write a letter to their family and leave the envelope unsealed until its contents were checked by one of the Sisters. “But there was little worry of our letters being censored because we wrote home in Polish!” said Halina.

Sunday lunch was always a roast and vegetables – “everybody’s favourite meal” said Mietka – and Hanna recalls having to wash up the dishes with Sr Collette. “I used to say to Sister that the first thing I would buy upon leaving school would be a dishwasher! Well, I still don’t have one and I often think of that lovely lady.”

Family members were allowed to visit during Sunday afternoon and Halina was always thankful for the chocolate biscuits her older sister would bring her during visits. “Oh, they tasted ever so good!” she said.

As a special Sunday treat, the Sisters would bake cake for afternoon tea. According to Halina, the cake was covered in “lots of lovely icing and we all lined up expectantly!” Although their English wasn’t very good, Halina said they knew the word “seconds” and were most happy to reach for a second slice of cake if by chance there was any left on the tray.

Sunday evening was the boarders in-house social evening. “We would attend a morality talk in the Hall and follow this with dancing,” said Halina. “The music was always played on a piano.”

All four ladies have many more amusing memories of their time at Santa Maria, including: the College corridors were highly polished jarrah and were cleaned by the boarders every Saturday as a part of their chores; Friday night dinner was regularly tripe in a white sauce and Halina remarks that it was “impossible to refuse the food with a nun standing over you!”; the girls thoroughly enjoyed playing tennis at Aquinas College; and all remember the Royal Tour in 1953. “We lined up on Canning Highway and waved as the Royals drove past,” said Halina. “This was followed by a show about the Royal family with the main actors standing on the College balcony wearing crowns and tiaras.” 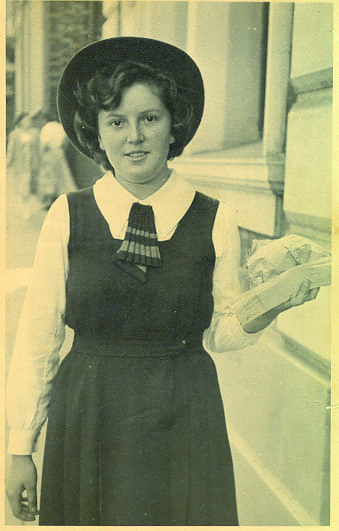 Hanna and Zofia stayed at Santa Maria until Third Year (Year 10). Mietka and Halina stayed until Leaving. “I am very thankful to Sr Mary Bertrand,” said Halina. “She organised for Mietka and I to get a teacher’s bursary in our Sub Leaving and Leaving years. That is how our mothers were able to finance our final years of school.”

Mietka and Halina loved their days at school and were both sad to leave. “On my last night at Santa Maria I sat on the second floor veranda, watching the flickering neon lights of the City of Perth across the river and cried,” said Mietka.

Although the five years at Santa Maria had, at times, involved hard work, frustration and anxiety, the years were also full of “new experiences, new friendships and academic achievement”.

Upon leaving Santa Maria, the lives of Mietka, Halina, Hanna and Zofia went in different directions, but the ladies are still in contact with each other.

Hanna lived in Italy and then in Fiji. She has two “wonderful” adult children and currently lives in Sydney.
Zofia worked for several years and her and her husband lived on a farm. She now lives in the Swan Valley and “enjoys gardening and being surrounded by the beautiful trees I have planted over the years.”
Mietka and Halina studied at Teacher’s College and completed further education after marriage and children. Both ladies maintained an active and studious lifestyle for many years, with Halina only retiring in 2000 and Mietka in 2001.

The ladies’ love of their homeland Poland has never waned and Mietka and Halina have worked tirelessly to maintain Perth’s active and cohesive Polish community.

In 1969, Mietka and Halina founded the West Australian Association of Polish Women. This organisation still exists today and aims to provide a point of unity for Polish women in WA and to promote the Polish culture. Since the 1980s, Mietka and Halina have continued to involve themselves in Polish community organisations and multicultural organisations including the Ethnic Communities Council, Ethnic Radio, Polish Youth Association, Polish Ethnic School and the Catholic Migrant Centre.

Both women have been awarded an Order of Australia Medal for their services to education and the Polish Community. They have also both received highly lauded awards from the Polish Government for their hard work.

Mietka currently works for the National Accreditation Authority for Translators and Interpreters as a Professional Interpreter and Translator and Halina has researched and written numerous books about Polish culture and traditions. She is currently completing Polish Feasts and Customs.

For these achievements and experiences, Mietka’s most sincere appreciation is directed to the Mercy Sisters. “Each (Sister), in her special way, contributed to the formation of my character and my vision for the future,” she said. “I am particularly thankful to Sr Eunion who fostered in me the love I had for music and to Sr Claude for encouraging me to aim for a career which at first I thought was out of my reach.”

Many thanks to Mietka, Halina, Hanna and Zofia for taking the time to share their stories with the College community. The ladies had many more funny and amazing stories about their time at Santa Maria and with the College beginning a Memoir Book, we hope other ‘Old Girls’ will enjoy sharing their memories too.