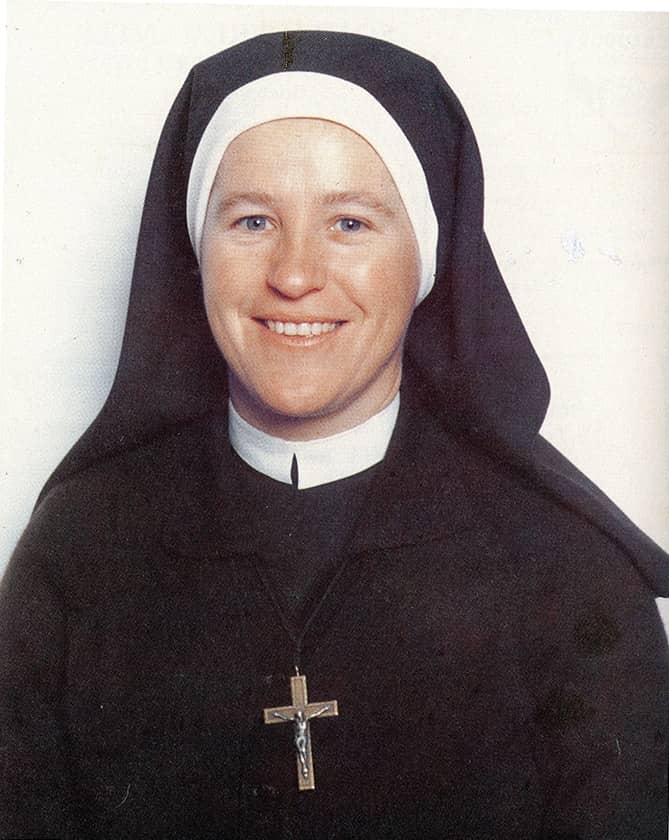 This morning at Mass, we remember Sister Irene McCormack.

Irene McCormack was a Catholic martyr, a missionary in Peru, a teacher in every sense of the word, and past student of Santa Maria College.

Irene was raised on a farm at Trayning, near New Norcia in Western Australia. She boarded at Santa Maria in Year 11 and 12 from 1953 to 1954. After leaving the College she joined the Sisters of St Joseph and spent many years teaching in schools in country areas.

After 30 years of teaching in Australian schools, Sister Irene made the difficult decision to leave teaching and serve the poor. She was strongly committed about being part of a more global church. This, she felt was her true vocation. She arrived in Peru in 1987 for missionary work. Despite knowing the inherent risks in such a troubled region, Sister Irene continued her ministry of providing library facilities to poor children, who had no chance of obtaining books to aid in their homework. She also trained extraordinary ministers of Holy Communion, as well as visiting parishioners in outlying districts and distributing Caritas food packages.

On 21 May 1991, Sister Irene was executed by the Shining Path Guerrilla group in the village of Huasahuasi. She was shot, along with four villagers. All five were accused by the Maoist group of dispensing ‘American food’ and spreading ‘American ideas (school books). Local people insisted that she was Australian, not American, but the guerrillas did not care.

Sister Irene is under consideration for beatification, although people in Huasahuasi already regard Sister Irene as a saint.

Sister Irene’s great nieces Gracie and Evie McCormack (Year 9), Grace Murphy (Year 9) and Rebecca Murphy (Year 8) currently attend Santa Maria. On this day, close to the anniversary of her death we give thanks for her life and the inspiration it gives us.