What Is the Secret to Growing Gritty Kids?

Watching my six year old niece learn to water-ski is to watch 20 kilograms of pure grit. If it is possible to will yourself to stand on water, she has done it. She failed often, she probably felt like a drowned rat, and her arms must have been aching. But she held on, time and time again. There was no telling her she wasn’t old enough, and there was no thought that perhaps it wasn’t possible. Like I said, pure grit.

Grit is difficult to define. But it is generally accepted to mean the motivation, energy and drive that keeps a person on a difficult task over a sustained period of time. Sometimes we refer to it as ‘character’. What we do know is that people have grit in varying degrees. We also know that it is contextually dependent. People may have it in one area of their life but not in others.

The hope is that we raise kids with grit. Research tells us that grit is an indicator of future success, academically and socially. It is also a trait we admire in people for its own sake. So, where do parents and teachers begin in teaching kids to be gritty?

It’s not possible to teach grit in isolation. In fact, there is very little research to suggest that grit can be taught at all. Some people are just born with it, like my niece. However, Santa Maria College Principal, Jennifer Oaten, says “It’s not about teaching grit. It is about providing opportunities and challenges that allow grit to be developed.”

Built into the curriculum at Santa Maria College are programs that encourage persistence, initiative, and opportunities for challenge. Fearless5 is one such program for Year 5 students. Each day of the program begins with a session called Famous Fails, where kids are told stories of people demonstrating grit in the face of failure. Even the children’s teachers tell their stories of failure, just as parents should.

Be careful not to trivialise failure. Failure isn’t just when things don’t work. Failure hurts. If it doesn’t hurt, it’s not failure. Overcoming that emotional pain is what builds grit. That pain is what kids need to understand. It is one of the emotions we need to acknowledge as normal even though it is uncomfortable.

Mrs Oaten is very clear that grit cannot be developed in isolation. “Grit goes hand in hand with other qualities such as courage, independence, resilience and most importantly, a growth mindset”.

A growth mindset is the deeply held belief that a person can learn anything given enough time and effort. Carol Dweck is Professor of Psychology at Stanford University. She is the world’s most recognised student of the mindset trait. In her 2014 Ted talk, she spoke about it in terms of, ‘The power of yet’. When your child says, “I can’t do this”, then you need to add, “Yet. I can’t do this yet”.

Dweck’s research shows that even explaining this concept to a child will affect the way they view their learning. She points to evidence that says, an understanding of growth mindset changes neural pathways that allow for greater growth in learning.

The opposite to a growth mindset is a fixed mindset. This is the belief that we are born with fixed abilities and these will limit our potential. It is easy to understand that a fixed mindset is not conducive to the development of grit.

Which Conversations Will Help in the Development of Grit?

Mrs Oaten suggests these three conversations for parents who want to help develop grit in their child.

How Do We Coach Our Kids to Show Grit?

As well as grit-building experiences, kids need us to coach them, so that they know how to deal with the big emotions that go hand in hand with challenge. Feelings like fear of failure, shame and vulnerability.

Emotional coaching is about calming a child and helping them to understand their emotions. It creates the space for us to connect with kids and help them learn how to self-regulate and problem solve.

Over time this process will become practised and easier. Eventually your child will learn to self sooth and problem solve themselves. If they have learnt how to manage the emotional side of difficult, long-term tasks, they will have the capacity for grit. 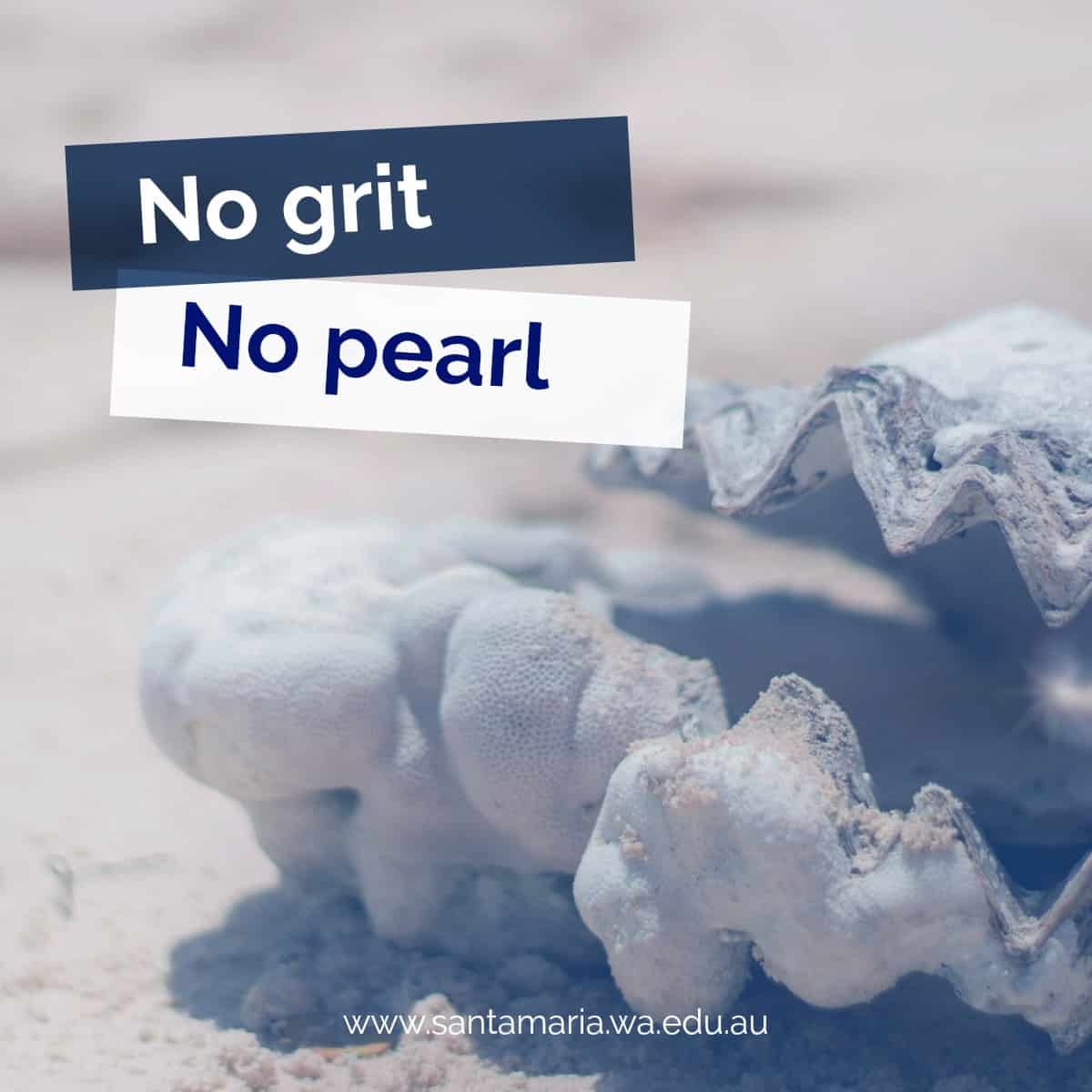 The final aspect of grit development in kids is obvious but often overlooked. Parents and teachers have to show grit. They have to role model it. They also have to show grit by being brave enough to let their kids fail. This is difficult in the face of judgement from others.

Like my little niece, parents and teachers have to hold on, even when the water is over their heads and their arms ache and they think they might drown. Grit is seldom pretty, but if you’re persistent, and you don’t mind failing and you believe it is possible, you will eventually be able to stand on water.