Stories of the ANZACS

At our ANZAC Day Memorial Assembly this morning, students read the stories of some of our ANZACS. Their stories are below.

Douglas Grant was a proud and resilient Indigenous Australian who served in the First World War. Born to indigenous parents in the remote community of Bullenden Kerr Ranges of Northern Queensland in the early 1880’s, he lost most of his family in what is believed to be a terrible tribal rivalry. He was then adopted and raised by Scottish scientist Robert Grant.

He grew up with the Grant family in NSW and attended Scots college in Sydney. Whilst at school he gained an interest in Shakespeare, drawing and poetry. In 1897, he won the first prize for the Queens Jubilee Exhibition for his drawing of the ‘Bust of Queen Victoria’.

At the time of the war, Aboriginal men were not allowed to enlist but as he was being trained as a mechanical draughtsman he was granted permission to join the 34th Battalion in January 1916, two years after the war began. However, on the scheduled day of departure the Aboriginies Protection Board intervened, stopping him from leaving. This was because Australian regulations prevented any Aboriginal person from leaving the country without the direct approval of the Australian Government. This would be the first of many setbacks he would face in his life time.

That same year Douglas re-enlisted and left with the 13th Battalion for France officially joining the war effort. He was 30 years old.

In April of 1917, after having arrived only two months prior, Douglas was wounded and captured in the Battle of Bullecourt by the Germans. Due to his Indigenous background, thick Scottish accent, his impeccable manners and educational knowledge he was a wonder to the German doctors, anthropologists and scientists who treated with moderate respect. Amongst the other Australians he was considered a close friend who displayed both honesty and honour.  He was to spend two years as a prisoner of war.

As a prisoner of war, he was sent to the German Camp at Zossen where he oversaw the distribution of comforts to Indian prisoners and acted as a member of the British Help Committee. His role was integral for providing communication about other prisoners and their location, through the help of the Red Cross. This information proved vital to families back home who were waiting on word of their loved ones.

Despite his longing to return home to Australia, Douglas would yet again face another setback. On the battle field Douglas was considered an equal, but back in Australia he was a second class citizen.  As an Indigenous Australian he was not entitled to the Soldier Settlement Blocks offered to other non-indigenous soldiers returning from war. As a result he spent the rest of his life as an advocate for Indigenous rights and for the rights of returned service men who found themselves dispossessed after the war. He would later die in relative poverty in 1951 at age 65 and is now buried in Botany Cemetary in Sydney

Today we remember the courageousness and honour of Douglas Grant and all the returned servicemen who faced hardship on their return to Australia. 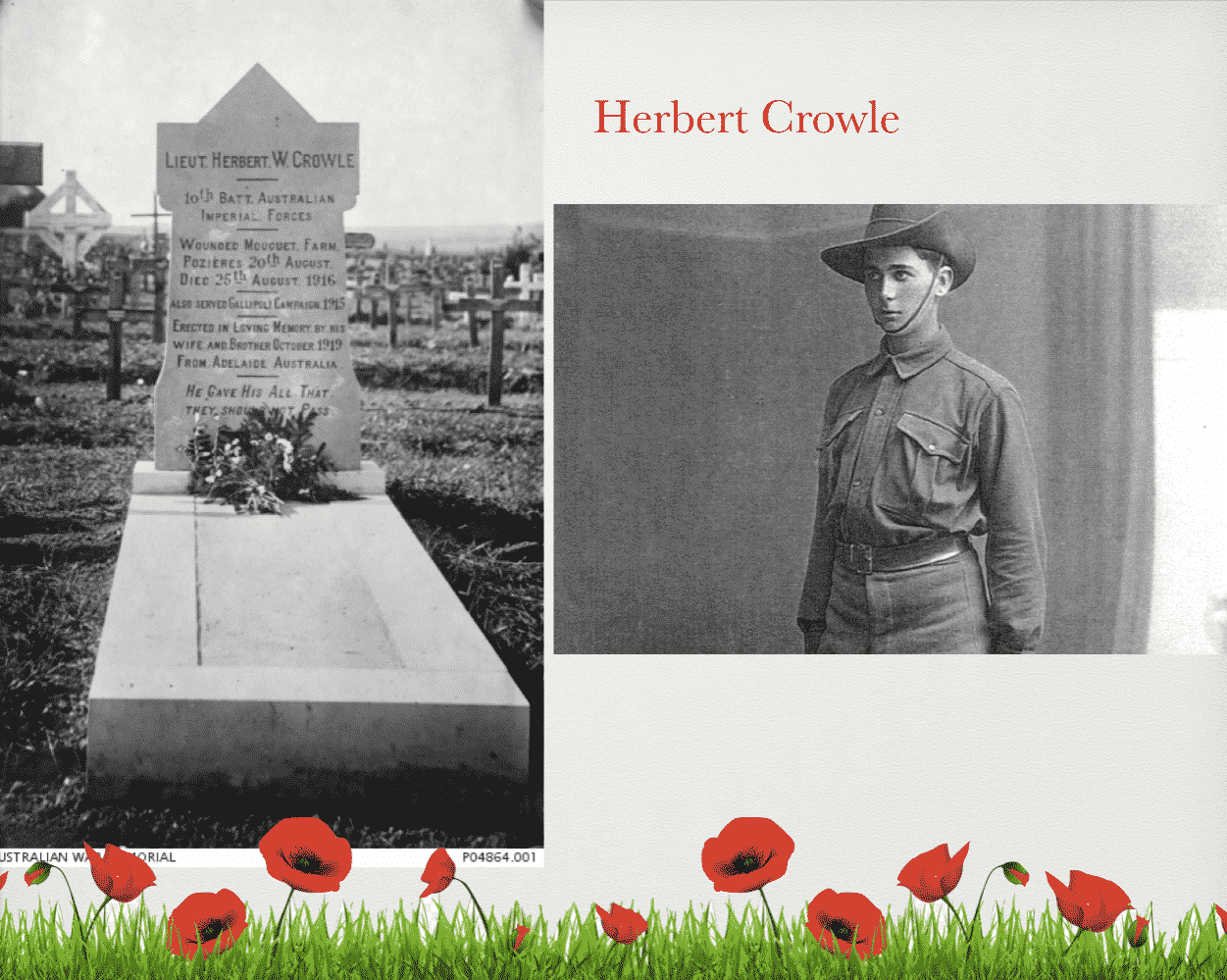 Herbert Crowle was 30 years of age when he departed the shores of Western Australia. Leaving behind his wife and baby boy, he set off to courageously defended the Empire, never to return.

On the  beaches of Anzac Cove he was shot in the eye by Turkish snippers, however survived the ordeal, the next time he was not to be so lucky.

After a period of recovery, being looked after by the Australian nurses at Lemnos, Herbert was sent to fight on the fields of France. Over       Australian soldiers were to lose their lives on these muddy fields.   In 1916 Herbert was cut down by a machine gun fire attack at Monquet Farm. The stretcher bearers race to his aid and carried him to safety.

They had to carry Herbert over 4 miles… (km) through enemy territory to reach safety behind the Australian line.

Not a single German soldier fired at them.

However, Herbert like so many other soldiers was to die 4 days later from his injuries. Gangrene had set in and in those days, Doctors did not have the necessary equipment and medicine to treat him.

Herbert lies buried in the fields of France on the edge of the Somme, yet there is something unique about his grave. His wife Beatrice on hearing of his death was determined to honour him properly. At great expense and with great determination she raised the funds to erect a memorial above the grave, which you can see in the photo behind me. The writing on the memorial reads  “He gave his all”.

However, what makes Herbert’s grave unique is that the memorial still stands to this day. After the war most, private memorials were taken down and replaced by generic war commissioned crosses, this was so all would be honoured equally. For some reason the Allied forces were touched by Beatrice gift to Herbert and left the memorial in place.

It is for this reason, that Herbert is fondly known in the History books as “the man that stood out”.

Today we remember the courage and love of Herbert and his family. 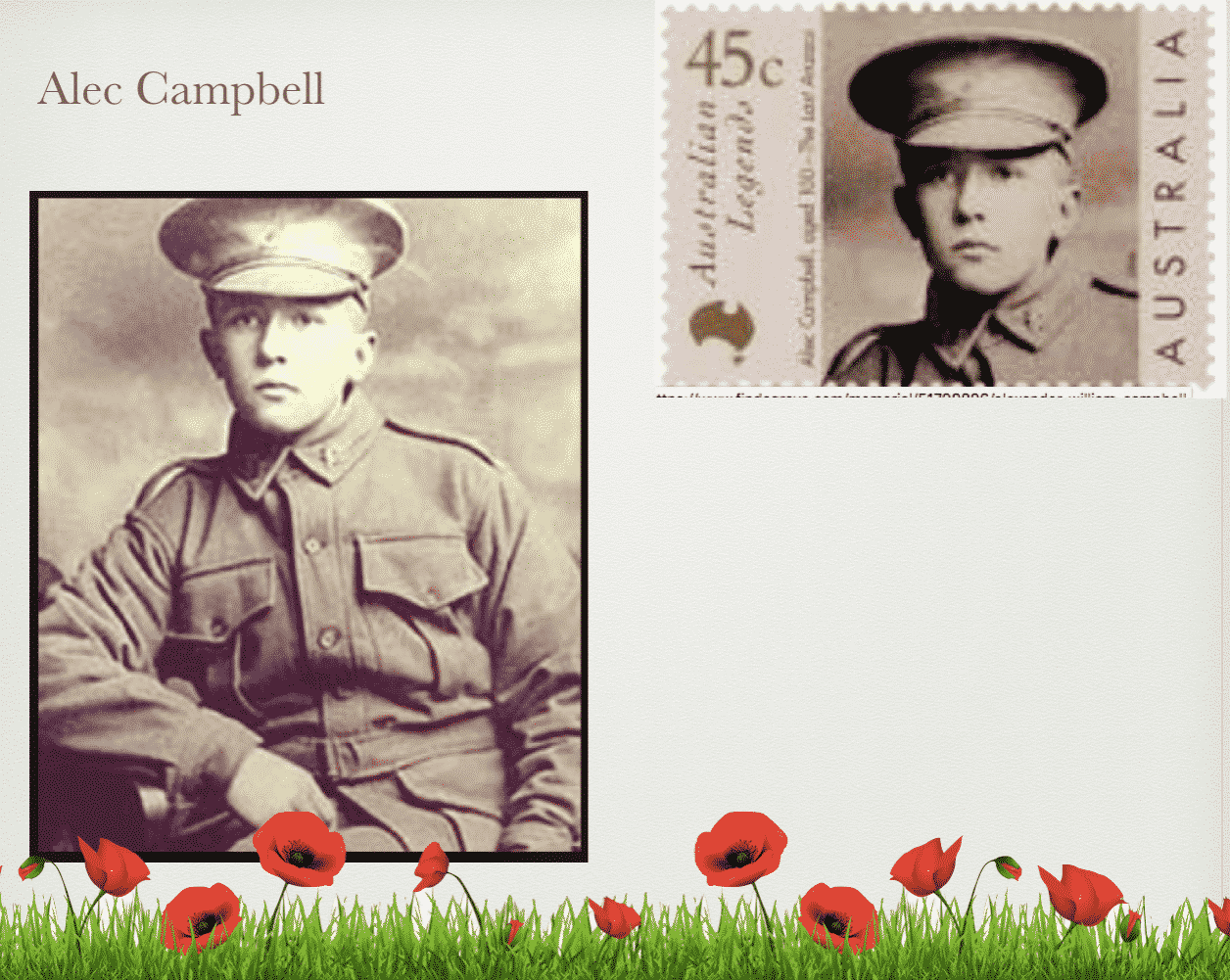 As we commemorate 100 Years since the end of WW1 it seems fitting to describe the life of the last ANZAC Alec Campbell.

He died peacefully in 2015. He was 103. It isn’t his death that we would like to focus on however, it was his amazing life that we should celebrate and remember.

His accomplishments are testament to the sort of people the ANZAC’s were.

He had helped build the first Parliament House in Canberra in 1927, graduated in Economics after he turned 50 and fathered the last of his children at the age of 69. He sailed in 6 Sydney to Hobart yacht races, was president of the Launceston Trades Hall Council, campaigned with Lady Jessie Street for peace and contributed to the Australian Dictionary of Biography.

“ It is unbelievable to think that Alec has lived in 3 different Centuries and had live with 87 years of graphic memories of those bloody battles of war. 87 years of waking up every morning and continuing life as normal, 87 years of being nothing less than a hero, 87 years of never once complaining of it.”

Alec like the other ANZAC’s felt bitterness towards nobody, knowing there was no point.

They were fatalists who strove against the oppression of death. Historian Bill Gammage stated.

‘ they had survived Gallipoli and the grimmer fields of France. They survived the Depression. Their marriages were long and by most accounts happy.”

“They scoffed at the notion that they were heroes, although a few remembered the words of Sir Ian Hamilton, the British Commander. “ Before the war, who had ever heard of ANZAC? Hereafter, who will ever forget it? “