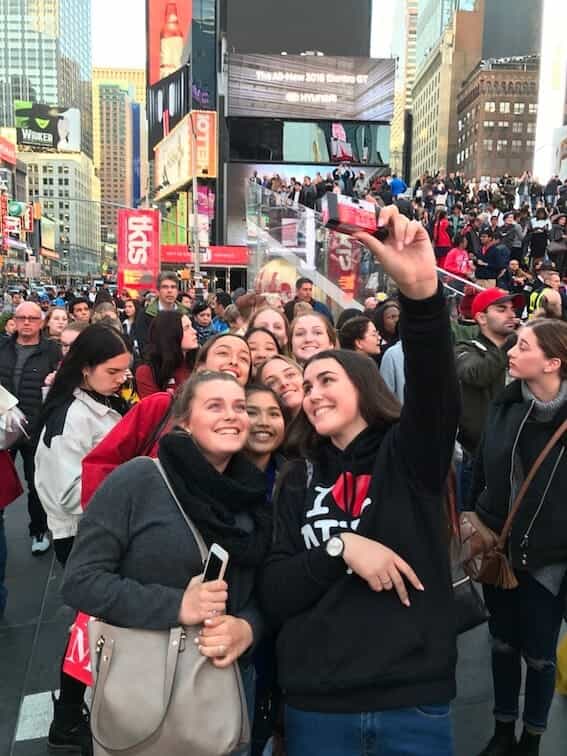 Meeting at the airport at 2.30 am proved to be a very early start to the Visual Arts Tour. Despite the early start, excitement for the 25 girls attending was still at a premium! Two long flights saw us landing in the Big Apple 24 hours later. We caught a night time glimpse of the Empire State Building, which was around the corner from the Wolcott Hotel. A busy two weeks followed, with visits to all the iconic New York highlights, set against a stunning springtime backdrop.

The next two weeks saw us visiting over twenty art galleries and museums, ranging from the overwhelming sizes of the Met, MOMA and Guggenheim, to the smaller uber cool galleries around the Chelsea district, which promoted much discussion about the merits of contemporary art installations.

We also participated in workshops in stage makeup and costume design, as well as conceptual art making, catering for both Design and Visual Arts students. One highlight was the street art tour of Bushwick in Brooklyn, where our tour guide gave us a great insight into the ‘Bushwick Collective’. And of course no trip to the Big Apple would be complete without some celebrity spotting…This time actor Alec Baldwin and pop star Ellie Goulding!

Dinner at the famous Ellen’s Stardust Diner really got us in the mood to see the Broadway hit ‘Charlie and the Chocolate Factory’, and the visual spectacular of this show did not disappoint. Of course the obligatory ‘selfies’ taken at iconic Times Square were a given!

We attended Easter Sunday Mass at the iconic St Patrick’s Cathedral on 5th Avenue, followed by watching the famous Easter parade. Of course, no Easter Sunday would be complete without a visit from the Easter Bunny, who found his way into Central Park on a beautiful sunny day. The weather was kind to us, allowing many opportunities to sit and sketch in Central Park, and on the Chelsea Highline.

Once again, New York did not disappoint as an amazing destination for the Visual Arts Tour! A big thank you to staff members Arianne Flora and Asha Brown who attended  and were an enormous help and support before and during the tour.