Going to The Chapel…

Many of our alumni choose to get married at the Santa Maria College Chapel and it holds special meaning for them. 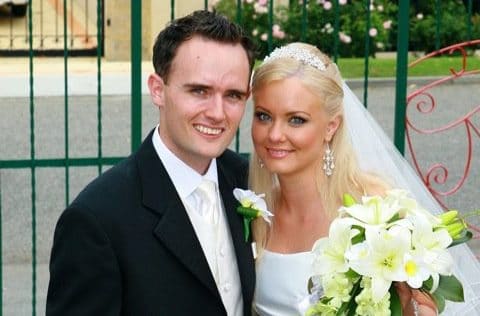 Alicia says that she and Paul chose to get married at Santa Maria Chapel, not only for the amazing views and scenery but for the fact that she attended Santa Maria College from Year 5 and it played a massive influence on who she is today. Alicia says, ‘We could not have asked for a better day!’

Aimee Leeson (Grandison, 1996) married Nathan Leeson on 26 February 2005 at the College Chapel.  Aimee remembers her wedding day was a great day which all went to plan with the bonus of surprisingly good weather, not too hot!

Aimee and Nathan loved the surrounds of the College and had many photos taken within the grounds. They had quite a bit of fun on the Figure 8 with their photographer and videographer getting action shots of them coming down the grass slopes with the iconic Santa buildings on display behind them.

Being Catholic, Aimee and Nathan wanted a Mass included in their wedding ceremony and The Chapel was somewhere Aimee had always planned to have her wedding. Thankfully her husband agreed! It was quite sentimental for Aimee after the many Masses she had attended there over her five years as a border at Santa.  Aimee even had Father Vincent Conroy celebrate her marriage as he was the Santa Maria College Chapel priest when during Aimee’s years at the College.

Amanda recalls always wanting to get married on the grounds of Santa Maria College in the beautiful College Chapel. Amanda loves the intimate and welcoming feel it has, and the surroundings are so scenic and pretty.

Two of her aunties who attended the College also married in the Chapel and Amanda wanted to keep this tradition going. It was a very easy choice for Amanda and Michael and they had a perfect ceremony.

If you are interested in holding your wedding at the College Chapel or would like any photos from your wedding published in the OGA blog, please contact [email protected] or telephone 6330 0279.