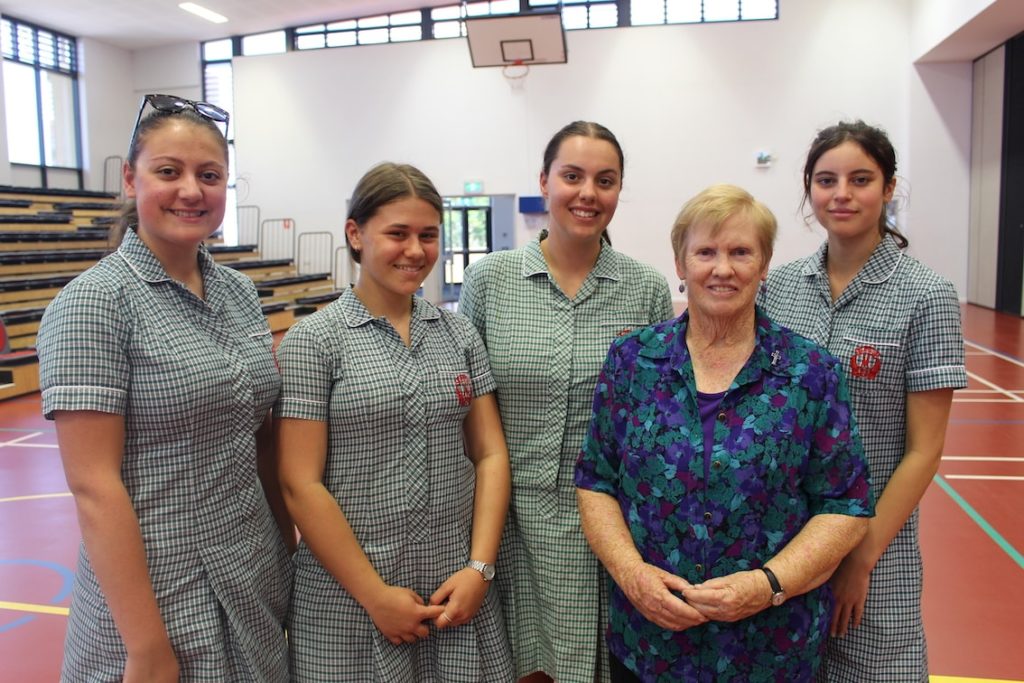 Santa Maria would like to introduce, and welcome Mercy Sister, Sr Breda O’Reilly to the College this year. Sister Breda will be at the College one day a week to talk to staff and students, to visit the sick, to give talks when needed and to support the Santa Maria community at all times. Sister Breda is also working two days a week at Mercedes College and volunteers at the Edmund Rice Centre, teaching English to asylum seekers and refugees.

Tell us a little about your early life in Ireland
I was born in Dublin. The same place as Catherine McAuley and Ursula Frayne. I went to the Sisters of Mercy School, and my parents died when I was young. When I was sixteen two Sisters came from Australia; they used to send them over to Ireland every four years. They would go around and visit all the schools, talking to the girls and would ask “Who would like to come back to Australia?”. They used to bring back groups of forty. However, the year that they came to our school in 1961, six of us came back with them.

When did you come to Australia and why?
I arrived in Australia in 1961. The Sisters came into the classroom in Ireland when I was 16 and gave this talk about Australia, I had to look on the map and find it, and when they asked who would like to come back twenty out of twenty-three girls put their hand up, but I wasn’t one of them.

I wasn’t interested. But then The Holy Spirit, I believe, got after me and wouldn’t leave me alone. Then I was the only one from the class who ended up going. All the other groups before us had gone by boat, but we were one of the first group to go by plane. I was terrified, it was my first time on a plane, and I was sick the whole way.

What challenges have you faced since coming to Australia?
There have been many changes; one would be when we didn’t have to wear the veil. I never liked the veil. I don’t believe the veil makes the Nun, and I use to get sore ears. There have been huge changes which are always a challenge. As well as changing the habit there was also the huge change when 15 of the 18 congregations became one Institute of the Sisters of Mercy of Australia and Papua New Guinea. I would also say that when I came to Australia, I couldn’t understand the accent of some of our Sisters, particularly the ones from Kalgoorlie! Also, the Australian heat was a huge challenge for me.

What three things do you value most?
I value the fact that I think I have been given so many gifts and I can share them. For example, on Fridays, I teach English to refugees and asylum seekers. That is something I value very much. I love giving and receiving hospitality. I know that is valued here at Santa Maria and I have already given a talk to the Year 12s on that topic. Finally, I  value belonging to the Catholic Church and to the Sisters of Mercy.

What are you hoping to learn from our girls?
I am hoping to learn that girls feel that life is good and that they have been gifted and are ready to share their gifts.  I am also hoping to imbibe some of their enthusiasm for learning.

We look forward to having Sister Breda with us at Santa Maria.